Nadab means “scar” in the Arabic language. It is a photography project by Alessio Cupelli done in collaboration with the NGO Intersos. Its purpose is to illustrate the disapora of migrants. The title refers to the scars in the souls and bodies of those people who are forced to leave their countries of origin. This project is also about those wounds that seem to be rooted in our memory, highlighting the conflicts not yet solved by the so-called Western world.

The artist causes us to reflect on how these wounds have not yet been healed and have become the main channels which these people pass through. The project began in October 2015, during one of the hotter periods on the Balkanic route. Crossing Hungary, Croatia, Serbia, Macedonia and Greece, the view of the photographer reveals the consequences of border closures by Europe. The photographer later travels to Libya and Jordan where millions of displaced people live in refugee camps without the possibility of moving on and scared about being sent back to their original countries. Through a very intimate point of view, attentive to allowing the dignity of the portrayed people emerge together with their silences far from the media hubbub on these issues to which we are accustomed, Nadab tells us the stories of these people stuck in the outskirts of Western countries where History repeats itself. 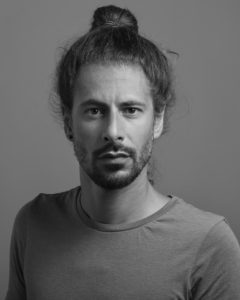 Born in Liegi in 1981, Cuppelli grew up in the photography studio of his parents in Pescara. He graduated from an art high school and after his studies in cinema at the Dams of Bologna, he moved to Rome where he obtained a master’s at the Scuola Romana di Fotografia in 2011.
In that same year he began working as an assistant to the photojournalist Paolo Pellegrin with whom he is still collaborating. In almost 4 years, he has traveled five continents working for commercial campaigns and collaborating on journalistic reportages. From these travels and experiences a project was conceived: “Some Kind of Records” is like a diary of photo notes that was exhibited at the Fotoleggendo festival in June 2015. Meanwhile, in 2012, together with eight other photographers, he founded 001, a photography collective, a studio, an exhibit venue, a publishing house and a training centre.
Since the end of 2015 he has been working on Nadab in collaboration with the humanitarian organisation Intersos. In the summer of 2016 he exhibited the first part of this work in a permanent installation at Villa Ada Meets the World in Rome.
www.zerozerouno.org/alessio-cupelli/
Footer version 1